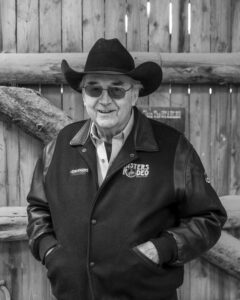 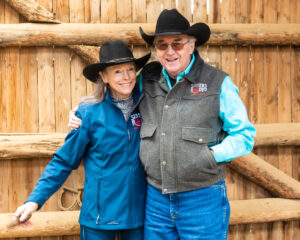 Sisters Rodeo is proud to announce long time member John Rogers as the 2022 Grand Marshal of the Sisters Rodeo Parade.

John, was actually chosen in 2020. Regretfully due to COVID the rodeo was forced to cancel for 2020 and 2021. He has been waiting for his place of honor to represent the Association as their Grand Marshal’s for this year’s highly anticipated event.

John and his wife Sharie have been attending the rodeo since the early 70’s and with the encouragement of current Arena Director John Leavitt became members.

John started out helping with parking during the rodeo as a member and worked his way up as a Director and then held the title of Treasure for many years. He stated he is most proud of the major projects that were accomplished during his time; which included the back parking area for the contestants to look like a golf course, the warm up area for contestants and starting the replacements of the grand stands. When talking to other members of the association they stated John played an major role in getting ATM machines to the rodeo grounds when they were first introduced back in the 90’s and then later the addition of internet wireless service.

Past President Glenn Miller stated “John is someone who I really respect. He knows rodeo and he is someone you could always relay on for anything and everything. He is just an all-around good guy. The time that John and I served on the rodeo board all of the Directors did the best for everyone, the community and the association.”

Past Director Ron Collins asked John why he just did not join the Association as he was always there helping and John said “because he didn’t want to pay an initiation fee.” John did join and was then asked by John Leavitt if he would like to serve on the board and of course he said yes.

When we asked John why he has been a member with SRA for the last 40 years he stated “he was very proud to be a part of the association and the professional rodeo it produced every year, not to mention the friends he made are ones to last a lifetime.”